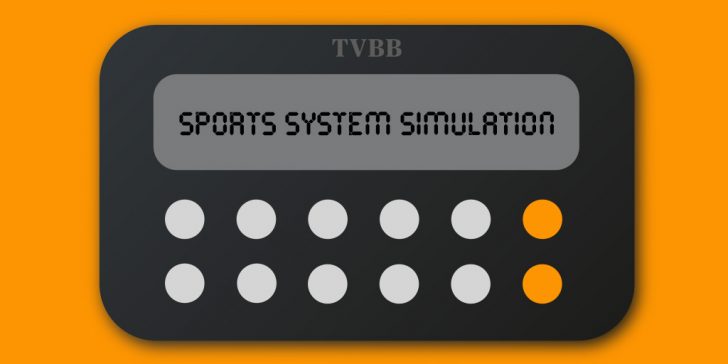 This one is pretty cool, even by our standards.. below is our advanced betting simulation; a calculator that shows the efficacy of your betting system based on a few basic metrics.

Check it out: (and scroll down for a full explanation)

This is a pretty powerful calculator, so before you start plugging in numbers, let us explain why we made it and how you can use it..

Plain probabilities are often counterintuitive. What is the probability of winning by luck? Is it very bad luck to suffer a drawdown of 50 units? And 20 units? How many bets are needed to consider that the results are not affected by variance?

It is impossible to answer these questions just by intuition, not even approximately. We need to make some calculations, by using formulas or, when there is no formula available, by using Montecarlo simulations.

So we created this simple to use but powerful calculator. It is based in several excel files we have provided in a previous article here. However, with this calculator we have streamlined the whole process, just input your figures and press the button.

This tool requires some basic understanding of betting terms and relevant mathematics so below is a full breakdown of all the inputs and outputs so you can use it most efficiently.

In order to define the characteristics of our simulation, we need these simple values:

The number of bets “N” of a betting strategy from the beginning or during a determined period of time, depending on the analysis we are looking for.

No one bets always at the same odds, but using this parameter, the results of the simulations are approximate enough. It is the result of multiplying each bet odds by the stake, and dividing the result by the total amount bet.

As its name states, it is the average amount placed in each bet. I can be calculated as the total volume bet divided by the number of bets. It can be expressed as units of stake, currency or percentage of the bankroll, but I always recommend to use the equivalency of 1 unit = 1% of the bankroll, so that it is easy to know how many times we have bet our bankroll (rollover), how much is the profit compared to the initial bankroll or how big is the drawdown.

Now we need three more parameters for the Montecarlo simulations and define some results we want to obtain:

How many times are we simulating a series or number of bets? The higher the number of simulations, the more precise results we are obtaining, but it will take some more time (although the calculations are very simple and it will take just few seconds). With 1000 simulations of 1000 bets, we are reproducing 1 million bets in a blink of an eye.

Probability of obtaining a drawdown greater than X

X is in the same units as the average bet size. In fact, the maximum drawdown is proportional to the bet size. If we want to know what the probability of losing half your bankroll, and the bet size is expressed in units with 1 unit = 1% of the bankroll, and we maintain the bet size during the bad streak, we should take X equal to 50 units. We would normally stop betting or reduce our bet size before reaching that big loss, but by calculating the probability of a maximum drawdown of half bankroll, we can compare the risk for different values of number of bets, yield, average weighted odds and bet size, and take decisions to adapt the risk to our risk tolerance profile.

Probability of obtaining a yield greater than Y

Variance affects the results after our number of bets. If the odds are constant and we assume that the long term yield is also constant during those bets, we can calculate the probability of each possible number of won and lost bets with the binomial distribution, and therefore, the yield distribution. What is the probability of obtaining a yield that doubles the long term yield in a short series of bets? We can use this calculator to determine the exact value.

After defining the inputs, we can obtain some intermediate results directly:

It is simply the average profit we would expect, and it is calculated as the number of bets multiplied by the yield and the average bet size.

The percentage of successful bets depends on the average weighted odds and the long term yield.

Any value above 0.1 units is a very good result. Winning 0.1% of your bankroll after each bet on average, with a sufficiently high number of bets will make you rich (if the risk is low enough 😅).

Probability of Luck vs Skill

Is a positive result the consequence of luck or it is very probable that it is the result of skill? We can never know the answer 100%, but we can estimate it, or at least compare different results with the p-value. This subject and the maximum drawdown have also been explained here. With the betting system simulation tool we are calculating these two metrics:

The calculations behind this are based on the formulas proposed by Joseph Buchdahl (@12xpert) in his article “Luck vs Skill in Sports Betting”.

Is simply the inverse of the p-value. It means how many times on average we should bet with the inputs defined in order to obtain such yield just by luck.

If you have found a positive expected value method, the higher bet size, the higher profit you will obtain… but it will also enlarge your risk. The profit and the drawdown are both proportional to the bet size, if we reduce the average bet size by half, both profit and maximum drawdown will be reduced in the same proportion.

It is VERY IMPORTANT to know what risk we are exposing ourselves to, in order to reduce the probability of bankruptcy to a low enough value.

It is the average drawdown we will measure after a number of bets. It is a measure of the risk of the method, and values below 30 units are advised. If you get higher values, you can reduce the bet size to a lower value until this recommendation is achieved. In case of a constant value of average profit per bet and standard deviation of the yield, a formula based on the brownian motion with drift and barrier can be used, as it is described in this article. The advantage of this formula is that the expected drawdown is calculated very fast, no Montecarlo simulations are required. The disadvantages are that only the average can be calculated, but not the distribution of drawdown, and also the value is approximated, as the bets are discrete “movements” of the profit, while the formula is based on continuous distribution of profits, but as we will see, results are very similar to those obtained with Montecarlo simulations.

It is the same value, but calculated after all the Montecarlo simulations. Its value is more accurate than the EMDD, but the time required for its calculation is higher. Additionally, as you can check, the value obtained varies after executing all the simulations because the Montecarlo procedure has some variability due to the fact that random numbers are used to simulate each series of bets.

We can estimate and compare the risk of any method by using the expected or average maximum drawdown, or the probability of drawdown higher than a defined value. It can be demonstrated that there is a direct relationship between the expected maximum drawdown and the sharpe ratio (𝜇/𝜎), as it is described in this article.

We can estimate the yield distribution with the yield standard deviation approximation, but it is also possible to use the binomial distribution to calculate the probabilities of different combinations of successful and lost bets.

Probability of yield greater than Y

When putting our money at risk, we do not only want to increase the profit, but also have a low risk in order to avoid bankruptcy with a high enough probability. We can compare between methods by using this ratio:

It is the ratio between the expected profit and the expected maximum drawdown. This value does not depend on the bet size, as both numerator and denominator values are proportional to the average bet size.

The same value but calculated with the Montecarlo simulations

A good way to compare different methods, is comparing the Profit / EMDD ratio for bets placed during the same period of time, for example, one year. Values higher than 5 are very good methods.

We have included a graph with a single simulation of bets. Each time you click on the “Calculate” button, we are reproducing the number of bets, yield, odds and bet size and plotting them. You can check that, for the same parameters, the resulting profit, the maximum drawdown and the curve during the series of bets can have very different shapes.

For example, this is an example of a result close to the average, and a maximum drawdown close to the expected value, for the default values of the calculator (N=1000, Yield=5%, Odds=2, Bet size=1):

Each time the red line of the current drawdown “touches” the barrier of 0, it means that the profit has reached a new maximum value.

Each time you click on the “Calculate” button, the number of Montecarlo simulations are executed. If we count how many times we obtain each maximum drawdown, we can plot the maximum drawdown distribution. As you can see, it is not symmetrical and the probability of suffering a maximum drawdown two or even three times the expected maximum drawdown is not zero at all.

The higher number of Montecarlo simulations, the more accurate this distribution will be, but the number of calculations and computing time increases.

In the following table, we can see some examples obtained by changing only one parameter with respect to the default values:

Advanced Calculator (changing only one parameter)

Which one is the best situation? Of course, it is the example 2, with a yield of 10%. We get more profit for a lower risk. Additionally, as the EMDD is 18.43, we could increase the bet size a little bit until an EMDD of 25-30, in order to obtain higher profit for a reasonable risk.

What happens if we test different combinations? If you have 2 methods with yield 5% for Odds=2 and yield 6% for Odds = 3 and the same number of bets and bet size, which method would be better? (Clue: Compare the Profit / EMDD)

Code of the simulation tool in javascript

Please let us know in the comments below if you found this helpful, if you have any questions or future calculator requests don’t hesitate to ask about that as well!